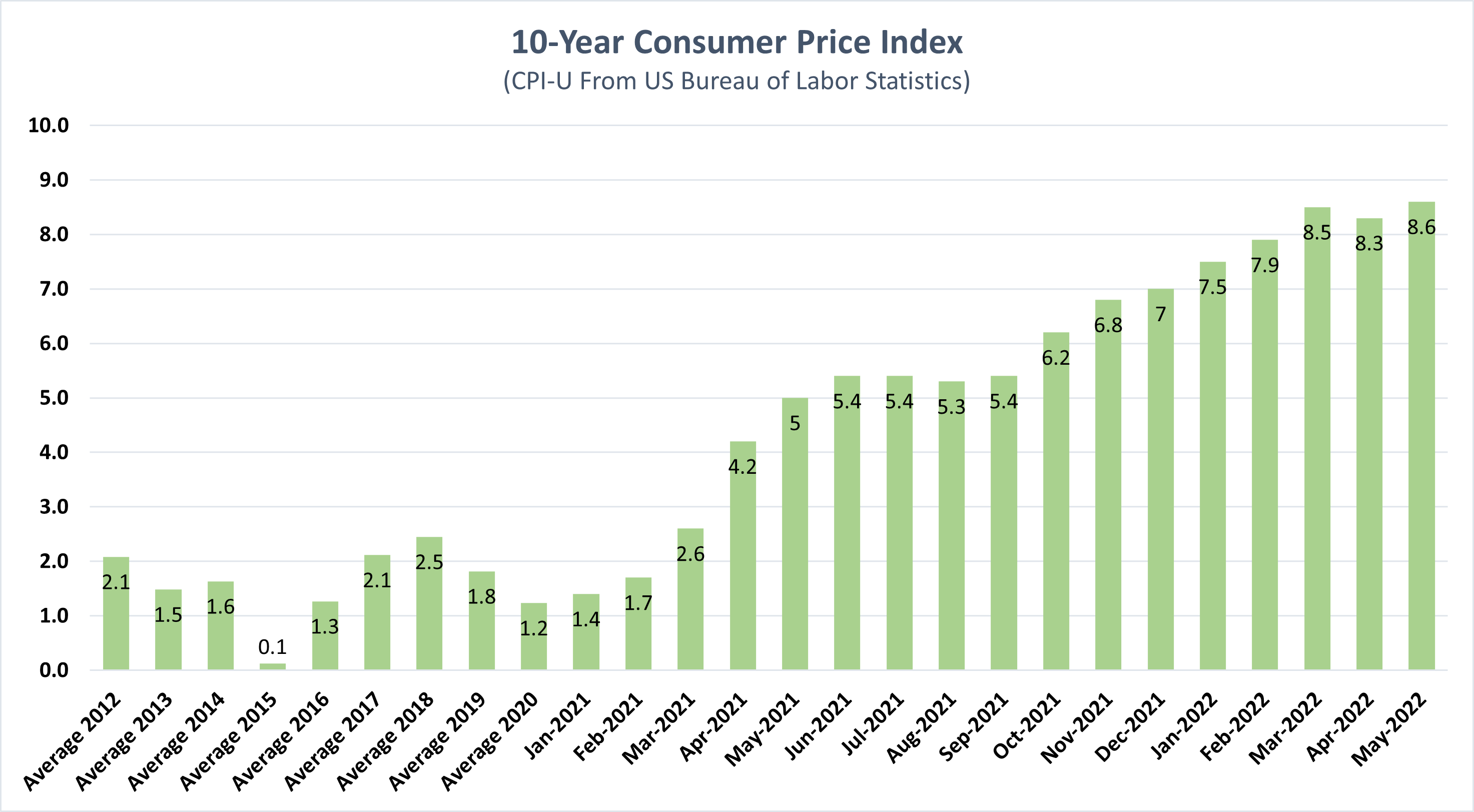 There has been a lot of discussion and handwringing on this subject lately.  The Reuters article in the link below captured Janet Yellen’s assertion that inflation is here to stay, at least for some time.  I’m not sold on this as an absolute reality, and I believe we can change things for the better.  (Also, as we also know, Janet Yellen also has some credibility issues, mainly due to her/the Fed not spotting/acting on inflation much earlier.) read it here

The following is my perspective on the whole matter.  It includes a two-pronged approach to remedy the situation – a combined fiscal and an energy policy:

It blows my mind that the Fed didn’t see this coming over a year ago. I’m usually not a Monday morning quarterback, but I believe they should have started to reduce the balance sheet in late 2020/early 2021, which is when the economy was clearly stabilizing as evidenced by a plunge in unemployment (steadily declined from its 14.7% April peak to 6.9% in October).  There may have also been a need to increase interest rates by 25 basis points around May of 2021, which is when the CPI had clearly begun its great ascent (went from 1.7 to 2.6 to 4.2 from February to March to April of 2021).

Please don’t get me wrong.  I totally agree we needed the stimulus during the initial stages of the pandemic when many countries, including the USA, went into lockdown, the stock market crashed, and many people lost their jobs.  As we know, the Fed started increasing the balance sheet, mainly by buying bonds and providing stimulus checks to many Americans to soften the blow to those impacted.

However, fortunately, that austere economic situation didn’t last long.  By the summer/fall of 2000, the stock market had recovered (plus some), and unemployment had decreased substantially.  Thus, it should have been obvious that the prior actions to revive and stabilize the economy were working quite well and, thus, were no longer needed.

Consequently, I am very puzzled that the Fed didn’t at least throttle back some of the stimuli including the bond buying and the stimulus checks.  I strongly suspect such earlier action, had it been taken, would have precluded much of the mess we are in today, perhaps all of it.

Although we don’t know what goes on behind closed doors, I strongly suspect much of this inaction was politically motivated.  Trump was seeking re-election and didn’t want to go down as the president who killed a good economy with “inflation medicine” (higher interest rates, less stimulus).  And Biden, once inaugurated, didn’t want to be seen as underperforming his predecessor, again by taking down the economy via a hawkish money policy.

How do we fix it?

First off, I believe we need to stop politicizing the issue and focus on the solution. The blame games that both parties and the news media are playing today clearly aren’t helping, as such dissent is only counterproductive.

That said, as part of the solution, I do believe the solution necessarily includes replacing those who clearly missed the mark in 2021.  This may sound somewhat radical, but it is not a new concept at all.  It happens all the time in business. And I’m sure Yellen isn’t the only one…

Meanwhile, and to this point, I sure hope the Fed has a tiger team of government and industry experts in place (Alan Greenspan, Warren Buffet, and Peter Lynch just to suggest a few names). I would have much more confidence in a constructive solution crafted by a team of experts who have already proven themselves over time than a bunch of academists who lack any meaningful real-world experience.

The go-forward money policy needs to be defined by this team, not the politicians.  With that approach, I’m most confident that we could quickly get back on the right track.  Since I’m not a subject matter in this area, my thinking could be flawed; however, this appears a time for immediate, decisive action.  If the tighter monetary policy must induce some short-term pain in the stock/bond/real estate/etc. markets, then let’s do it now and get it over with.  Bad news doesn’t get better with time, and quick/decisive action should lead us to a quicker recovery/ return to normalcy, while also reducing the risk of the dreaded stagflation of the 1970s.  (I grew up in this era and, believe me, it wasn’t fun!)  A more rapid action to raise rates might even result in less of a market downturn, as it would be closer to a “one and done” approach and would thus lessen the duration of the current state of uncertainty and speculation.

I also believe reigning in energy costs needs to be an equally high priority as fiscal policy.  More on that in the next section.

Runaway energy costs have been and are key inflation drivers, as was evidenced by the aforementioned stagflation of the 70s.  I believe this assertion is buttressed by at least two things:

Regardless, energy costs appear to be one of the largest – if not the largest – element that is impacted by inflation.  Please see the chart below.  This is yet another factor that’s driving the urgency to get this part of the inflation equation fixed.

I believe today’s energy inflation started with the pandemic.  When nearly everyone went into lockdown, there was a sudden drop in demand in April of 2020, and the price of oil briefly went negative worldwide.  That severely jolted the oil industry and put significant financial stress on oil producers and refiners.

However, that’s only part of it.  I believe the situation was significantly exacerbated by the big push to get rid of fossil fuels ASAP, which was a knee-jerk response to our global warming crisis (which I believe is indeed real and needs to be addressed in a logical/methodical way). Due to these combined factors, I believe oil and natural gas producing companies saw little future in these commodities. This business requires continuous investment (company funds) to develop new sources, new technology and to build new infrastructure (drilling, refineries, etc.).  Without these ongoing investments, existing wells dry up, supplies diminish, and prices increase.  I believe that’s exactly what started to happen – all prior to Russia invading Ukraine.  (Please note I included refineries, as that’s driving gasoline prices as much or more than the price of crude itself.)

So, because there was a real drop in demand in April of 2020 that was accompanied by an ongoing huge, artificial push to get rid of fossil fuels, it should come as no surprise to anyone that oil and gas companies didn’t see much of a business case in continuing with future investments, as it makes no sense to send good money after bad.  Hence, we really cannot blame the energy companies, as they are just as much victims of these circumstances as are we, the consumers/end users.

Although supplies may not have started to dry up much yet, I believe this could happen soon enough and that it’s already being priced into the energy markets today.  And, as we all know, we now have the Ukraine war/Russian oil boycott to boot!

How do we fix it?

The good (perhaps great) news is that our situation today is much different than it was in the 70s.  During the 70s, we relied heavily on imported oil.  Thus, we were at the mercy of oil-producing nations.  Today, the reverse is true.  We are now #4 in the list of #15 top oil exporters.  Believe it or not, we slightly outrank the United Arab Emirates and come very close to Iraq, which is #3 (read it here).  Hence, we are now much more in control of our own destiny in terms of meeting our domestic and perhaps some international demand.  The benefits of this range anywhere from stabilizing current prices (unlikely worst-case) to significantly reducing them (much more likely scenario).

As unpopular as this might be to some, I believe we need to start by incentivizing/ increasing US oil and natural gas production and building new refineries – immediately!

For the long term, I believe we should step up clean/renewable energy technology development/implementation in parallel increasing fossil fuel production/refinement. I believe the government could help in both areas.  It can provide tax incentive for our domestic energy companies to drill and build new refineries, and perhaps contract with them exclusively to replenish the strategic oil reserves, as they are currently being tapped as short-term relief.  In parallel, the government can also provide the same tax incentives plus maybe some investment into clean/renewable energy.  This includes not only developing the technology, but also implementing and integrating it with existing infrastructure as well.

Case in point on integration:  The Biden Administration and some states (including California and New York) are pushing hard for EVs and are forbidding natural gas hookups in new commercial and residential constructions.  As we’re already seeing with EVs in CA, we only trade problems with this anecdotal approach.  We may be burning less gasoline but are now straining the power grid.  Such will likely result in burning more fossil fuels, including coal, to shore up supply to meet the increased demand, thereby undermining (or perhaps even worsening) our initial environmental objective.  My point here is that we need an integrated energy policy that entails a time-phased implementation that addresses the inevitable trade-offs in order to preclude these unintended consequences.

Also, please know that I am not advocating more government spending, as I believe the government needs to spend less, not more.  If the Federal, State, and local governments would only put their current anti-fossil fuel propaganda and legislation money toward clean/renewable energy, I believe the timeline to affordable clean/renewable energy for everyone would invariably be much shorter.

In closing, I anticipate that, as we implement clean/renewable energy on a larger scale, the phaseout of fossil fuels will take care of itself.  So, no need for propaganda nor legislation!  People will naturally gravitate toward what works best and costs the least.  For instance, did we require legislation in our shift from landline to mobile phones?  Going back a little further, how about when we migrated from VHS tapes to DVDs?  And, today, our migration from local computer processing/storage to cloud-based processing/storage?  The obvious answer to all:  “Of course not!”  So, let’s just let the free enterprise system do its thing – it really works!

Next post My View on Abortion and the Recent Roe V. Wade SCOTUS Ruling