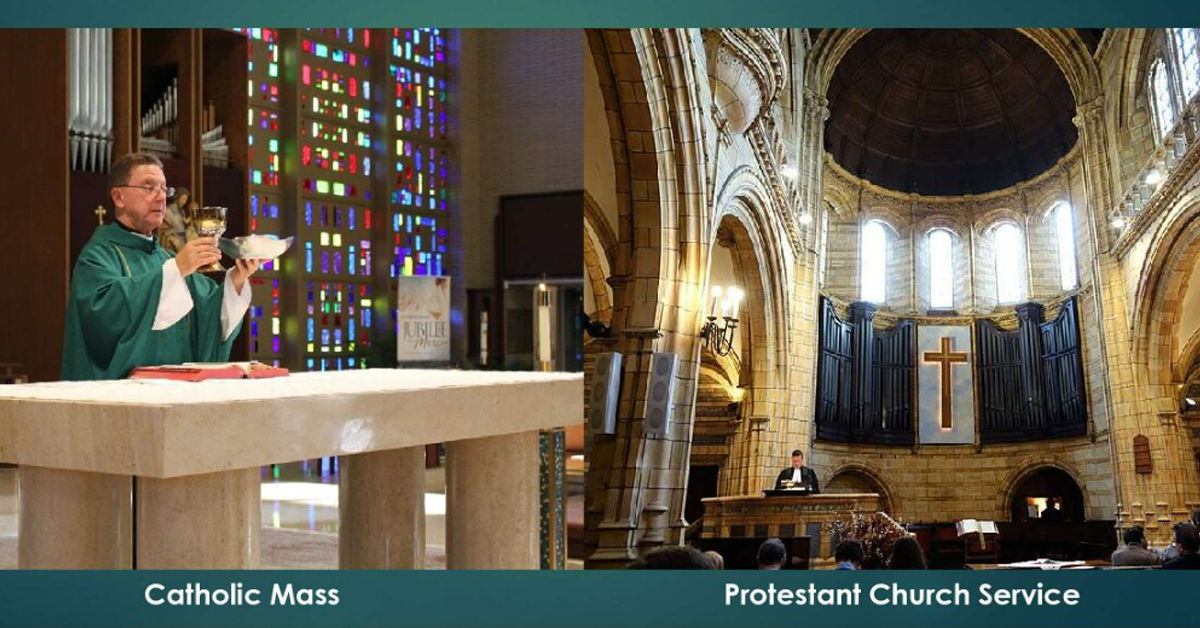 Throughout the history of the Catholic and Protestant Churches, there has been considerable discussion and debate between people of both faiths. Such has led to considerable misunderstandings and what I believe to be an exaggerated perception of the fundamental differences between both faiths. As an advocate of Ecumenism (i.e., bringing Catholics and Protestants closer together), I would like to help clear up some of the most common misunderstandings and false impressions.

Since I already have dedicated pages on the subjects of Church history and bringing Catholics and Protestants together (just click on the above links), I’ll jump right into the facts and fiction of what both faiths believe.

Fact:  Nothing could be further from the truth.  As stated above in the Catholic Church history, the foundation of Catholicism is the original Christian Church establish by Jesus and His apostles.  Confusion probably arises by Catholics responding “No, I’m a Catholic” to the question:  Are you a Christian?”.  Also, “Catholic” and “Christian” often appear as separate items on a multiple-choice question that appears on many applications, surveys, and questionnaires.  This is because Catholics might inadvertently interpret “Christian” to mean “Protestant” or “Nondenominational Christian”.  However, Catholics definitely consider themselves to be fully Christian.  They always have and always will. Hence, this confusion is often caused by semantics/interpretation thereof alone.

Sadly, some (but not many) Protestant denominations teach their members/their children that Catholics are not Christians. Although very misguided, I believe they are still well-intended and simply want to defend/protect the Christian faith in general.

Fiction:  The Catholic Church is opposed to science and rejects evolution.

As a (now retired) engineer, this is one of the many things I enjoy about being a Catholic. It also deepens my faith in God in that no human could ever architect, design and build a system that comes anywhere close to being as grand as the human body and the planet/universe that we live in.

Fiction:  Catholics worship Mother Mary (AKA Virgin Mary) and the saints and therefore commit idolatry by equating them to God.

Fact: Catholics worship only God.  We do honor and adore Mother Mary and the saints, but we don’t at all consider anyone equal to God.  We don’t pray to Mother Mary nor the saints as we pray to God, but we do ask for their intercession in the same way as one would ask a friend to pray for us.

We know Mother Mary is the one who gave birth to Jesus Christ.  When I first converted to Catholicism, I was uncomfortable referring to her as the “Mother of God” because I thought it implied that she is somehow above God on the org chart, which is completely false.  However, as I thought it through, I came to realize that Mother Mary is, in every way, fully deserving of this title.  As we know, Jesus Christ is both fully God and fully human.  His Father is God Himself, and his mother is Mary, a human being.  We all believe in the Holy Trinity (Father, Son, and Holy Spirit), which further asserts that Jesus is God Himself.  Thus, if we were to deprive Mother Mary of this title, then we would have to deny that she gave birth to Jesus and/or that Jesus is God.  We know both are undeniable.  Hence, through deductive reasoning alone, Mother Mary is indeed the Mother of God, with respect to being Jesus’ mother.  This is not idolatry.  Instead, it is recognizing Jesus as the instantiation of God that was conceived by the Holy Spirit and born of the Virgin Mary – exactly as stated in the Apostles Creed, which is the universal creed that clearly and succinctly states all the important parts of the Christian faith.  The Apostles Creed is accepted and believed by most – if not all – Christian denominations including Catholic, Lutheran, Presbyterian, and many other Protestant denominations.  I like to refer to it as the Christian elevator speech.

This also means that Mother Mary was born without sin, as this the only way to ensure that Jesus, Himself, is without sin, since he was born of the Virgin Mary.  Catholics call this concept the Immaculate Conception.  This sets her apart from all other human beings, which exactly fits the definition of the word “holy”.

We also petition Mother Mary to pray for us. At the wedding party in Cana, Mary intervened for us by asking Jesus to do something about the party hosts running out of wine.  The result was Jesus’ first miracle that He performed while here on earth (John 2:1-11).

The Virgin Mary is also the Mother of our Church, as directed by Jesus himself just prior to His death (John 19:25-27).  Although those words were spoken to a particular disciple, we believe His intent is for all of us to take in His Mother as our Mother.  Hence, we refer to her as Mother of the Church.

These are the primary reasons we so venerate our blessed mother.

In a similar way, we venerate the saints, who have demonstrated their utmost commitment to God via their works, faith and supernatural ability that was entrusted onto them by God.  This is fully recognized and declared upon their canonization.  We also ask for their intervention in our prayers in the same way we do our friends/family and Mother Mary.

Fiction:  The “Hail Mary” is a prayer that Catholics made up.

Fact:  The “Hail Mary”, as spoken in the Holy Rosary and on other occasions, actually has its roots in the bible, mainly the Gospel of Luke.  Therefore, the Church did not make it up!

Fiction: Catholics don’t believe the bible.  Instead, they have their own written word.

Fact: Catholics do very much believe the bible.  In fact, every Mass includes at least two readings directly from the bible.  However, we also recognize that each book of the bible was written by a certain person to a certain target audience at a certain time under certain circumstances.  Thus, each book needs to be interpreted in its proper context.  Also, because the books of the bible have been translated more than once, the newer versions are prone to translation errors, as no two languages always have a perfect word-for-word translation for each and every word.  Hence, if we simply take the words in the bible at face value, it would be somewhat like listing to just one side of a two-way conversation, thereby leading to likely misinterpretation of the intended message.  This concept is shared by some modern Protestant denominations as well as Catholics.

Due of the utmost importance and complexity of the bible, Catholic scholars are in the forefront of scripture study, and the official writings of the popes and Vatican commissions and councils are laced with references to scripture.

We also believe that the bible is not intended to be a history book that perfectly/accurately documents events, dates, etc., as would the History Channel or National Geographic.  However, we do believe that the bible accurately conveys to us everything that God wants to have revealed to us about His word and His nature.  We also believe it is best interpreted by the Church’s theologians and bible scholars.

Fiction:  The Catholic Church added 7 books to the Old Testament of the bible.

Fact:  These 7 books were used extensively by the early apostles in their teaching and were included in the biblical canon, which was accepted by all Christians prior to the Protestant movement.  Martin Luther removed the seven Greek writings from the Old Testament as part of his Reformation.

Fiction:  Catholicism is a man-made religion.

Fact:  The Catholic faith stems from the original teachings of Jesus Christ.  The core belief is that Jesus is our one and only Lord and Savior, and that the Catholic Church started with Jesus’ anointing of Peter as the founder of the Church, as stated above in the history of the Catholic Church.

Perhaps some of the confusion stems from the fact that we pay reverence to Mother Mary and the saints, but this is nothing more than a manifestation of the Communion of Saints as depicted in the Apostles Creed.

Fiction:  Catholics “made up” the concept of purgatory, as it’s not in the bible.

Fact:  Purgatory is firmly rooted in scripture.  The National Catholic Register has a good article “11 Descriptive and Clear Bible Passages About Purgatory” that I believe captures this quite well.  Note there are both Old Testament and New Testament references to purgatory.

I also strongly suspect some Protestants were misguided by the Medieval Church’s abuse of indulgences into thinking that purgatory was invented by the Church in order to serve these indulgences.  It wasn’t.  The concept of purgatory goes all the way back to the Old Testament, which was written long before the indulgence abuse situation arose. However, it was temporarily misused and abused by the Catholic Church in the Middle Ages.

Fiction:  Catholics consider the Pope to be the infallible and ultimate authority of the Church.

Fact:  Catholics recognize the limitations of all human beings, including the pope.  The pope recognizes this too, as he goes to confession just like the rest of us.  The modern-day pope does not govern the Church as a CEO leads a company.  Instead, he leads by example and guides the Church.  In fact, nearly every modern-day pope faces the challenge of dealing with the bureaucracy of the Vatican.  Churches are led/governed mainly by their parish priests, local bishops, and diocese/archdiocese, whose views occasionally oppose those of the pope.

This wasn’t always the case.  In the medieval period, the pope had much more authority over the Church and, oftentimes, the people in general.  However, that has significantly waned, especially during the aforementioned Catholic Reformation.  In fact, now the pope, bishops and clergy are there to serve the laity (non-clergy members of the Church) in carrying out the Great Commission.

Fact:  Protestants don’t “hate” anybody.  They are taught to love as Jesus loves in the same way as Catholics.  However, there is definitely an anti-Catholic sentiment in the US that came with the Protestant European settlers that established the 13 original US colonies.  This heritage could explain why some Protestants appear more anti-Catholic than most Catholics appear to be anti-protestant.

Another possible cause of the confusion is that some Protestants tend to take the bible very literally.  They so love God and God’s people, but sometimes such interpretations could cause them to subconsciously marginalize non-Catholics and non-Christians out of their love for God.

Also, Protestantism is a very broad and diverse denomination, as may Protestant Denominations were created as part of the Reformation movement that started with Martin Luther.  We also have the independent nondenominational Churches to boot.  Unfortunately, a small number of non-denominational Church leaders drift away from Jesus/His teachings and advocate hate and violence to the point of becoming a cult instead.  Take David Koresh and his followers for example.  I cannot say they aren’t Christians because, hopefully, some might still believe Jesus is the Messiah, but their thoughts, values and actions are often diametrically opposite to Christianity of all denominations.

Where We Are Today – Primary Differences Between Catholicism and Protestantism

I’m sure many have written books on this subject, as there are a lot of minor differences in our rituals/practices.  However, most boil down to these key things:

Aside from these relatively minor differences, our beliefs are fundamentally the same!  I believe that, once we set aside these differences, there is a huge amount of common ground onto which we could/should base our mutual respect, friendship, and working together.