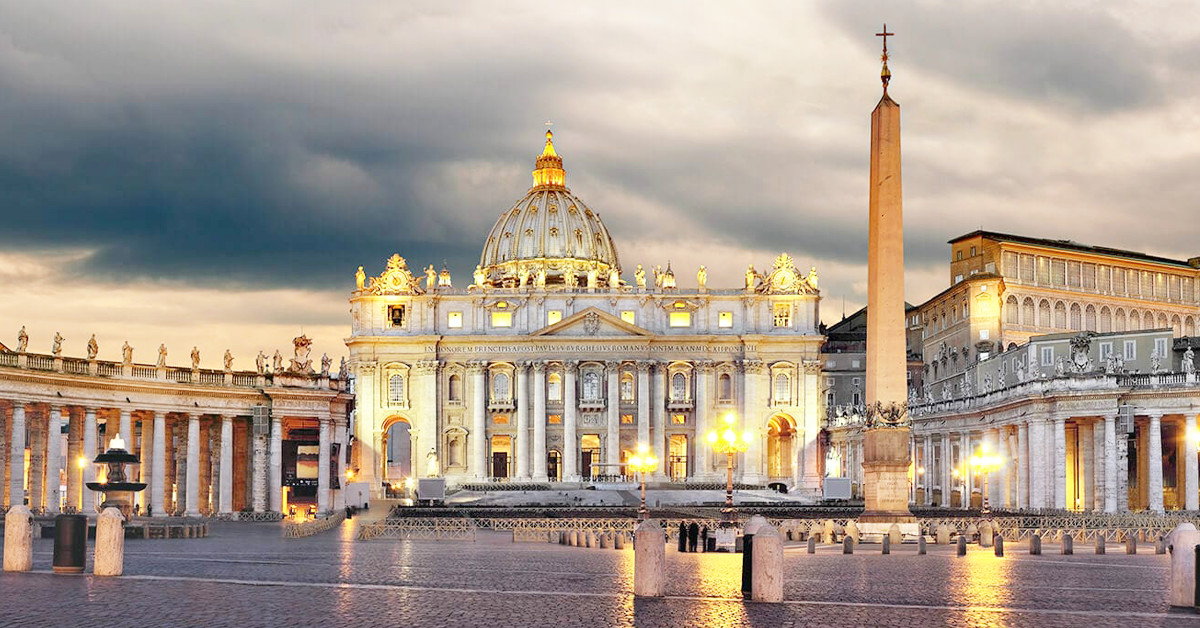 According to Catholic tradition, the Catholic Church (full name: Roman Catholic Church) was started by Jesus Christ.  This occurred prior to Jesus’ crucifixion, when he was traveling around Israel and other parts of the middle east fulfilling his mission – as appointed by God, The Father – to save the world by spreading the good news that is so well captured in John 3:16.  He had multiple followers/students known as His disciples, and that followership was growing very rapidly each day.  Presumably in anticipation of His crucifixion and resurrection, He appointed 12 of his key disciples as his apostles to become his “messengers” and continue his work of salvation.  Simply put, their directive was to go forth and make disciples of all nations (Mathew 28:19).  It is known as the Great Commission (Matthew 28:16-20), and it was carried out mainly by word-of-mouth with due reference to the scriptures, or bible.  The Catholic Church’s birthday is celebrated on the Pentecost, which is when the Holy Spirit descended upon the apostles.

Jesus also tells Peter “I also say to you that you are Peter, and upon this rock I will build My church; and the gates of Hades will not overpower it.” (Matthew 16:18).  Hence, Peter (later to be canonized as St. Peter) was appointed as the Church’s first archbishop.  This position later became the Pope as the Church and its hierarchy grew throughout Rome and mainly Western Europe.

Please note that the Eastern Orthodox Church also claims to be the first Christian Church.  It, too, as its roots in Sacred Tradition, and the Eastern Orthodox Church is based on the first Gentile church, which was founded in Antioch.  It is known as the Church of Antioch and is described in  Acts 11:20–21.  It was also recorded in Acts 11:26 that this is when and where the disciples of Jesus Christ were first called Christians. It was from Antioch that St. Paul started on his missionary journeys.  So, was the first Christian Church actually the Catholic Church that was started by St. Peter or the Church of Antioch that was presumably started by St. Paul?  Or did both start at about the same time and took parallel paths?  That debate is a huge subject in itself and is, therefore, way beyond the scope of this writing. It is a highly complex subject about a time in which things weren’t well documented.  Hence, I will base this discussion on the Catholic Church, as it is the basis of the Western faith and the Protestant movement and therefore more germane to our discussion.

Moreover, as the Catholic Church grew in its membership, it also grew in its power and ability to influence the secular world.  In fact, it became a significant economic and political power in Rome and other places, mainly in Western Europe, which were under its influence.  Although anointed by God Himself through Jesus, the Church was also a human-led institution.  This, coupled with its financial and political power, led to its corruption.  Thus, from its onset into the 1500s (Medieval period), the Catholic Church gradually lost its moral compass and became corrupt.  One of its key areas of corruption was in its administration of indulgences, which is the ability of the Church to reduce one’s penalty for his/her sins, including time in purgatory.  Purgatory is a final “cleansing by fire” that prepares one for heaven immediately after he/she dies.  The good news is all in purgatory will eventually go to heaven, but the bad news is their time in purgatory will entail much suffering.  Instead of applying this power in good faith, the clergy benefited by selling indulgences for money – a clear abuse of power.  Also, priests were criticized for being uneducated and upper echelon Church leaders were accused of being corrupt.

A German priest/monk, named Martin Luther, was very concerned about the abuse and misuse of indulgences and its impact on everyday Church members, or laity.  He feared such would undermine their spiritual development and ability to obtain God’s true grace and forgiveness, which needs to be based on internal repentance (AKA a “change-of-heart”) versus simply purchasing a document from the Church. Hence, Martin Luther just wanted what’s best for the people and the Church.  Thus, he attempted to reform the Church by publishing a letter that specified the reforms he deemed necessary/appropriate known as the 95 Theses, which was published on 10/31/1517.  The misuse of indulgences was the central theme, and it appeared to take direct aim at Pope Leo X’s efforts to sell indulgences to raise money to rebuild St. Peter’s Basilica, which is the main temple and dwelling place of the Pope. It is located in Vatican City, across the street from St. Peter’s Square.  Luther’s reforms consisted of mainly 3 things:

Martin Luther had no intention of breaking away from the Church.  Instead, he just wanted to reform it and restore its pristine purpose of fulfilling Jesus’ Great Commission.  Again, his main motivation was his concern for the laity/parishioners being misled into thinking that they could buy their way out of sin simply by purchasing an indulgence.  He wanted them to know that forgiveness of sin can only come from God.  However, his 95 Theses was not at all well-received by the Church, so after roughly after 4 years of ongoing discussion, he was excommunicated by Pope Leo X in 1521.  Once this happened, Luther started the Protestant movement, basing it on the reforms he tried to get the Catholic Church to adopt via his proposed Reformation.  Martin Luther wasn’t the only one who wanted to reform the Catholic Church, as many other Catholics did as well. This resulted in a major migration of people to this newly-formed denomination of Christianity.  More on Protestantism in the next section.

It started with Pope Paul III calling the Council of Trent, which was arguably the most impactful vehicle of change/reform of the Catholic Church.  It accomplished two things:  1) It cleaned up the corruption and reaffirmed the original Canon Law, which specifies how the church is organized and governed, thereby restoring its original integrity.  2) It reaffirmed its fundamental beliefs as a countermeasure to what the Protestants were asserting.  The main points being a) salvation via faith plus good works, not just faith alone; b) the Church is the ultimate interpreter of the scripture/Holy Bible and that both scripture and Catholic Tradition are independent and equally authoritative. c) The veneration of Mother Mary, the saints and relics.  There were also additional Catholic Reformation Initiatives that followed the Council of Trent.

The Catholic Church was further updated during the tenure of the Second Vatican Council, known as Vatican II.  During its tenure (10/11/1962 through 12/8/1965), several enhancements were made to the Church that made it more relevant to the people.  Vatian II’s major areas of accomplishment included 1) updating the liturgy from a Latin-spoken Mass with the priest facing the alter to a Mass spoken in one’s native language with the priest facing the congregation;  2) delegating a larger role to the lay people in carrying out the Church’s main mission of continuing Jesus’ works of salvation; 3) introducing the concept of religious freedom; and 4) starting dialogue with other religions/Christian denominations, which led to today’s ecumenism movement to have the different Christian denominations better understand each other and work together.  This made the Church much more relevant to most of us in modern-day times, which further mitigated the original concerns of Martin Luther and his reformers.

There is an even newer 21st century initiative to enhance the spirituality of the congregation via renewed emphasis on evangelism (not to be confused with the Protestant Evangelicalism movement) and catechesis.  This one personally excites me because it focuses on one’s personal relationship with Jesus, which I believe is at the heart of Christianity and Protestantism.  It also helps to bridge some of the gaps between Protestants and Catholics.

Hence, thanks to the collective efforts of the Council of Trent and all the additional reforms and enhancements to the Catholic Church and its government up to and including those currently underway, the original situation that Martin Luther was trying to rectify prior to his excommunication no longer exists.  Not only that, but I believe the modern-day Catholic Church has come along much further in that it has incorporated some of Martin Luther’s ideas plus those of others who succeeded him.  Yes, the Catholic Church, via the efforts of Pope Francis, continues to fight and fix corruption within the Church, but it has indeed come a long way, and I believe its issues, fortunately or unfortunately, are on par with those of other/Protestant denominations.

Meanwhile, shortly after being excommunicated, Martin Luther started the Protestant Church based on the Reformation he had proposed for the Catholic Church, as proposed in his 95 Theses.  It started with the Lutheran denomination, which was founded by Martin Luther himself.  Luther’s principles of reformation also quickly proliferated and led to many other Protestant denominations including Baptists, Episcopalian, Evangelical, Methodist, Presbyterian, United Church of Christ, and a myriad of other Protestant and independent/nondenominational churches.  In addition to Martin Luther, John Calvin and Huldreich Zwingli were also major players in the protestant movement.  Today’s Presbyterian, Reformed Baptist and Reformed Churches embrace Calvin’s beliefs, and the Swiss Reformed Church is based on Zwingli’s beliefs.

Basically, Protestant beliefs are what Martin Luther outlined in his 95 Theses, which boil down to basically 3 things:  1) The bible is the single source of God’s revealed truth; 2) We are saved by faith alone; and 3)  We all have equal access to God and, therefore, don’t need a church priest as an intermediary (AKA priesthood of all believers).

So, where does all this rich history leave us Christians today?  In short, we all worship the same God and, although we might express/practice our faith in somewhat different ways, our faith, in itself, remains the same.  We all believe in the Holy Trinity (one God manifest in 3 persons – the Father, the Son, and the Holy Spirit) and most Churches implement a Trinitarian Baptism.  We all believe that Jesus Christ is our one and only path to salvation and that he is indeed the Messiah, as foretold by the prophets.  We all also believe in loving one another and doing good works, whether we believe that’s a necessary part of salvation or not.  We all also believe that the Holy Bible was indeed inspired by God.

However, we still have our differences.  Some Protestants believe the bible is to be taken literally as God’s spoken word and that it is the only true revelation of God and His will for us.  Some other Protestants and nearly all Catholics believe the bible needs to be understood in the context of the author of a particular book, that person’s target audience, and the culture/circumstances under which a particular book was written.  Catholics also believe the Catholic Tradition (based on Jesus’ verbal teachings when He started the Church) is an independent, complementary source of equal authority regarding what God wants to be revealed to us. Again, it is a compilation of the verbal instructions that Jesus passed along to the apostles.

It will be interesting to see how things evolve from here.  I only pray that Catholics and Protestants will become less divided and start working together for our one-and-only common God, who manifests as the Father, the Son, and the Holy Spirit. I have no issue with each denomination retaining its own identity, sacraments, and other means of expressing faith. However, I would like to see us operate as a federation of Christian Churches working toward the greater and common good versus being adversaries to each other.

If interested in further reading on ecumenism, please check my dedicated page on this subject. To further help with this mutual understanding, I also have a page that clears up some common misconceptions that Protestants have about Catholics and vice versa.